Home
Products
About Us
Factory Tour
Quality Control
Contact Us

Thanks for your kindly hospitality. Your company is very professional , we will have nice cooperation in the near future.

Good company with nice service and high quality and high reputation. One of our reliable supplier , goods are delivered in time and nice package.

Please develop more nice laser machines and with better prices, so we can sell your machines to more clients and gain larger markets. Thanks you.

Thanks for your good after-sale service. Excellent training and technology support helps me a lot.

Thanks for Perfect Laser's lasting supporting and guidence. With your help and instruction, I win more market share.

Recommedation is good. Reception is professional. Demo training is also very great. Wish more online training after getting the machine.

The machine for mixing

Used in feed, food, cement, chemical, pharmaceutical industries and so on.

Shaft Seal
To prevent the materials leaking out.

The rotor of the machine is equipped with two layers of paddles (four big paddles with special angles in the outer layer and four small paddles with special angles in the inner layer). The big paddles drive the materials turnning over leftward and rightward at fast-flow zone and make continuous circular movement in the mixing chamber towards all directions, keeping material mixed evenly under the function of strong convective mixing. The small paddles also greatly increase the convective mixing at slow-flow zone. In addition, the two layers of paddles can reach the effect such as diffusion, shear and impulsion in materials, so as to obtain fast mixing with high homogeneity.

The inspection door allows unobstructed access to the inside of the mixer.

The inside of the machine and the mixer paddles can be cleaned quickly and easily. Fully-open doors and W-shaped trough plus unique air-sac seal; Momentary discharging, minimum residue, no leakage. 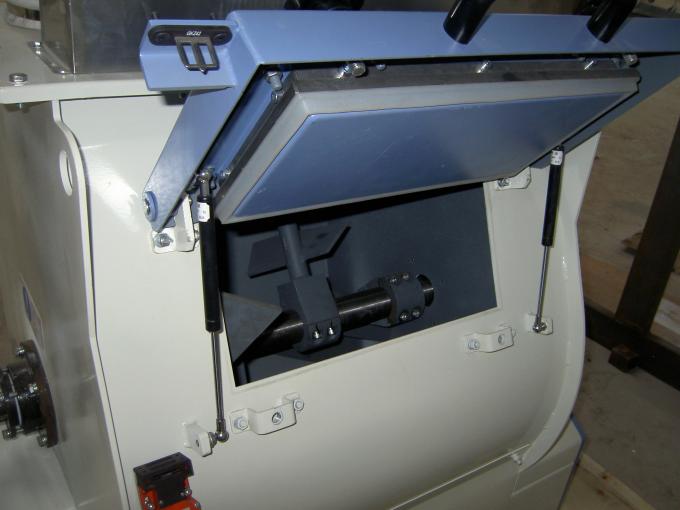